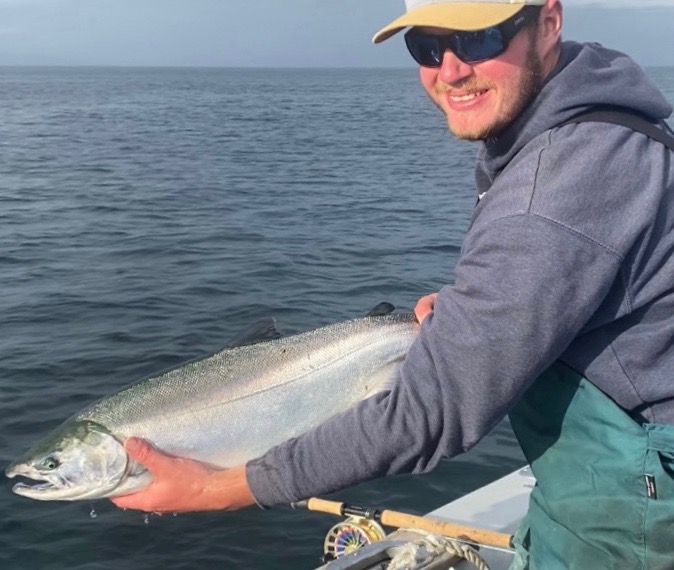 During my first 4 years guiding at Haa-Nee-Naa, August meant fly fishing… which in turn meant every switch over I was tasked with setting up fly rods for eager anglers fresh to the lodge. I dreamt of the ‘old days’ that Clay and Jason would reminisce about, but my only experience was casting heavy sink tip lines with flashy bait pattern flies into the abyss with little or nothing to show for my efforts. Catching just one coho on the fly would have excited me. I couldn’t even imagine a 6 fish day. The worst part is: I knew the coho were there. We would catch them left and right on cut plug herring but the pursuit of happiness on the fly had never delivered for me.

Despite these seemingly terrible, overwhelming odds, my fellow guides and I kept trying – we’d go out every evening after work and give it our best shot.  Hoping and waiting for that eventual tug on the line that signaled a silver-bright feisty fish was chasing our clouser minnow. After such a long, dry streak when the first grab finally came the reaction was typical: too excited, too quick, out comes the fly and there goes the photo opportunity. The clock would then reset itself and the wait for the stars to align would begin once again.

Before the coho season of 2021 had even officially started, an early gaggle fly anglers headed out to try their luck – it was mid July and it was the start of something that would confirm all those old stories were actually TRUE.  I’d been hearing about double digit days and wolf packs of coho chasing your fly, where fish boiled bait into frenzies that made the ocean churn like a hot tub.

That first night out in July we ended up hooking multiple coho on the fly; in the past the feeling of catching just one fish would be enough to keep us eager but multiple hook ups turned us into downright junkies. It was still early in the fly season and I was already daydreaming of better days with new techniques, unique fly selections and new unexplored kelp beds to fish. Fantasy had just become a reality and I was hooked!

August came quickly: we eagerly traded out mooching rods for 8 weight fly sticks, herring coolers for fly boxes, and as our first official fly fishing trip of the season arrived, anglers were keen to see if all the hype of the exceptional coho run was for real. What followed was a month of the most incredible fishing I have ever had the honour of experiencing. The seemingly far-fetched stories of the past were coming to life right before my eyes.

One evening a favourite anchoring spot on Holliday Island (I have those now) placed me on a sandy flat in less than 15 feet of water.  Nestled between large outcroppings of rock this structure created a unique back eddy that funneled large schools of flashy 2” jack herring into the zone. As I watched through polarized lenses I saw what looked like torpedoes smashing straight through the bait as they flailed away from the oncoming speeding bullet.

On top of the water aggressive coho were smashing bait leaving a massive boil of water and a whirlpool in their wake. The fleeing schools of herring that got too close to the rocky shoreline would leap into the air – many landing on the rocks only to have the constant tidal flow sweep them right back into the strike zone of the feeding wolf packs. This amazing feeding show seemed like something that should be narrated by David Attenborough as part of a Planet Earth documentary.

In this moment I would have been just as content sitting back watching this spectacular show as I was casting my fly into the melee. Added to all this splendor were the feeding humpback whales in the background, the flat calm water and the orange, purple haze of the sun as it tipped the horizon – like one of these spectacles wouldn’t have been enough! I felt like I was experiencing what the first pioneers of this Dundas Island fly fishery had witnessed more than 25 years ago. Many of our returning guests have been waiting years for these exact conditions to repeat themselves, in 2021 these days were back, and now again we wait with increasing excitement to see what the future holds.

2021 may not have been as surreal as the old glory days of Dundas fly-fishing, but I couldn’t imagine how it could be much better; I can only hope to be proven wrong again.