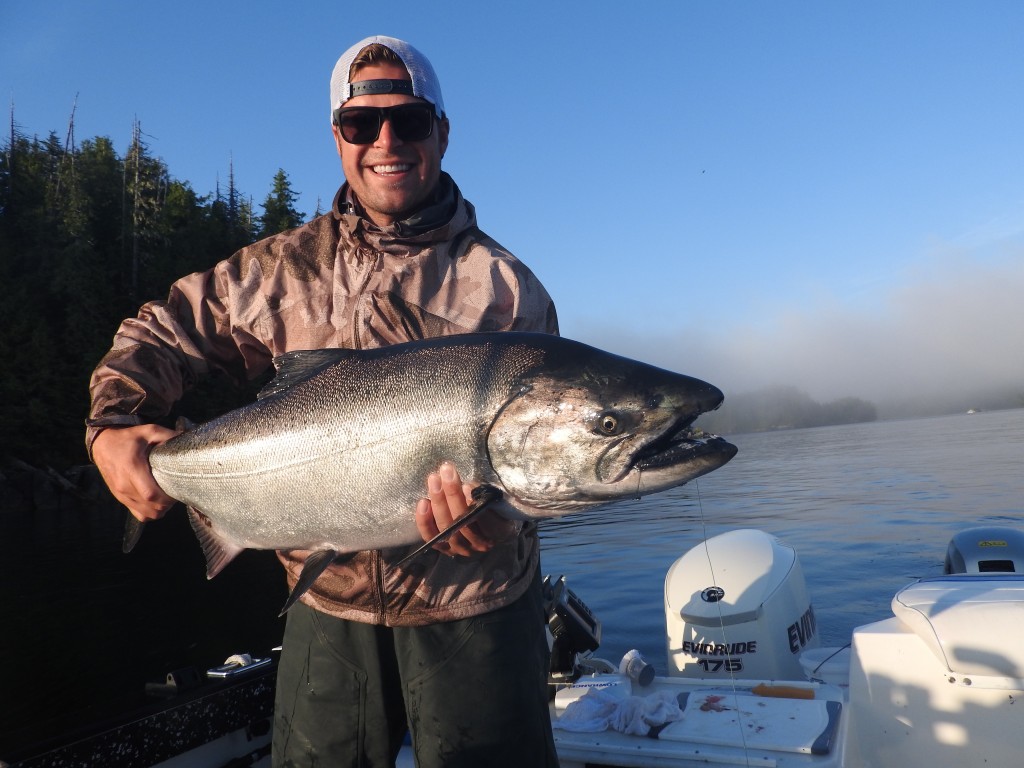 Overall, chinook fishing in 2015 was great!  Lodge guests experienced consistent catches all season long, hooking limits of bright fish daily.  The arrival of our first guests in late May kicked off our season with larger numbers of fish than previous years.  While the average fish weight was smaller than in previous seasons, the numbers definitely made up for it.  As we often see when targeting migratory fish, there were ‘bumps’ of salmon throughout the season: last season the end of June was a bit of a slump as fishing tapered off a little. This only lasted for a short time frame then the fishing came back strong as we moved into July.  Mid-tide bites seemed to be the ticket last season, more often than not the bite would come on right smack in the middle of the tide change – a refreshing transformation from 2014 when the bites were very unpredictable and fleeting.
Weather seemed to play a large part in the good fishing.  May had only a few hours of rain throughout the entire month.  Normal average rainfall in Prince Rupert in May is approximately 132cm (52 inches), less than 3 cm (1inch) of precipitation fell in 2015.  June, which can sometimes be a rainy month, was equally nice.  These warm conditions paired with the long hours of sunlight had a noticeable effect on the marine conditions.  The ocean was teeming with algae and plankton, conditions perfect for herring to actively feed in the shallows and close to the surface.  Where there is bait salmon are never far behind! 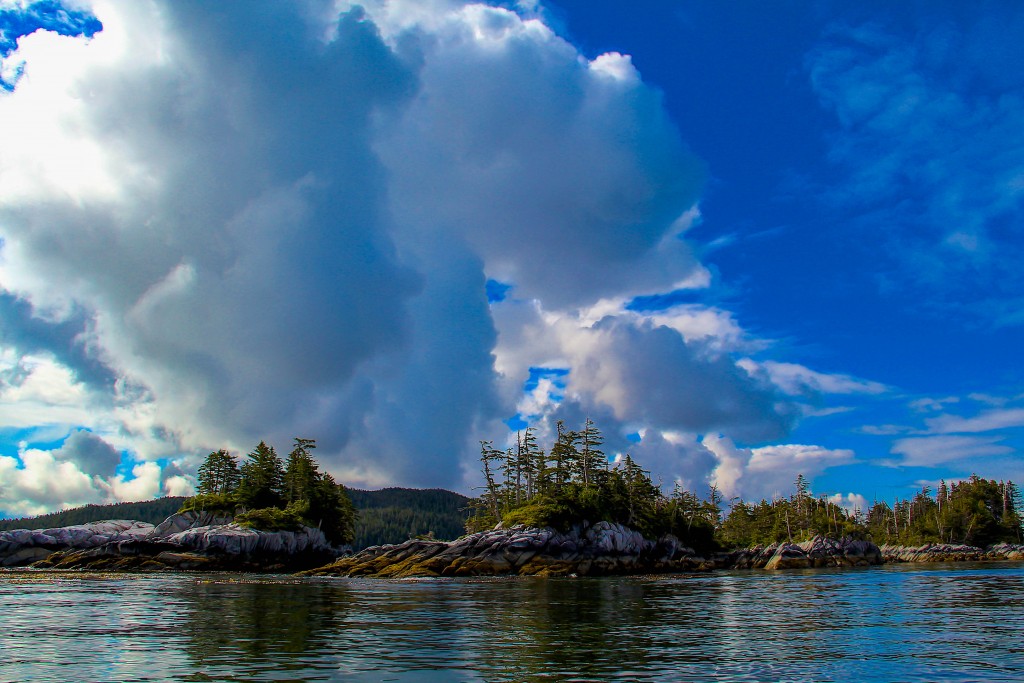 With little wind and few storms lodge guides were free to roam wherever the bite would take us.  The average weight of chinook salmon in May/June was below our 25 year lodge average, though many fish in the 20-25 pound range were boated by our first eager guests.  These early season fish pull line very hard – there is something that makes them a little different.  Maybe it is the long, cold winter without our rods bent, or just that these anadromous fish are genetically perfect in every way.  After an amazing journey where they spend 3-8 years at seas, less than 2% of theses fish beat the odds and return.  They swim past our island to feed on the abundant bait fish in preparation for yet another amazing journey up our wild, remote northern rivers to spawn; continuing an age-old cycle.
The first Tyee of the season was caught by none other than Anita Irwin Bowers, Jason’s lovely bride.  Anita’s 34 pound buck at the end of May set the stage for many other Tyee that would arrive later.  As June crept along the average fish size stayed about the same, though fishing continued to be very strong and most guests were able to take home their limits.  For a few days in late June salmon fishing was slower than normal.  There are a few factors which may have contributed to this.  Though they are only guesses at best, the most plausible theory is that the north coast drought, while it brought great early season action may have also been a factor to the clearing of water surrounding Dundas Island.  Clear means no plankton – which is the foundation of life in the ocean.  Krill and other euphausiids feed off plankton and in turn the herring feed on them.  This may have pushed the salmon runs a little offshore and made them travel deeper in search of food their favourite food: herring.
The late June slump didn’t last for long, the rain eventually showed up and with it the return of some real Dundas Island hogs – there were four fish landed at the lodge weighing in at over 50 pounds!! Congratulations to 15 year old Kate Leeuwenburg who on her first ever salmon fishing trip landed a beautiful 55 pound chinook, out-fishing not just her Dad, but Uncle Chris and Grandpa too – all seasoned salmon fishermen.  Overall the 2015 season saw over 50 Tyee landed – that means you have a 1 in 4 chance of being the next member of the Tyee club.  These are some of the best odds Chinook fishing on the coast of BC.  The strong Chinook fishing continued un-characteristically late into August. One noteworthy slab was a 35 pounder brought to the boat in the third week of August! 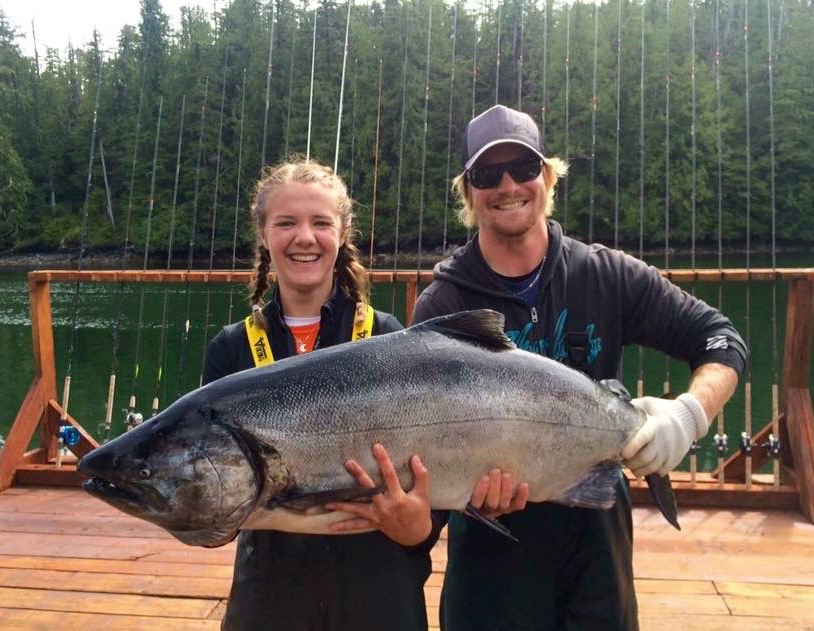 Another of the many highlights of the season was watching Leon Loucheur set a new lodge record – one that may never be broken! Leon caught a 30lb Tyee on a small trout rod using a buzz bomb with 12lb test line! The battle lasted about an hour and the Chinook tired out before Leon did, giving him the chance to net the fish all by himself. This was an extraordinary feat for any angler and is an experience that Leon will never forget! 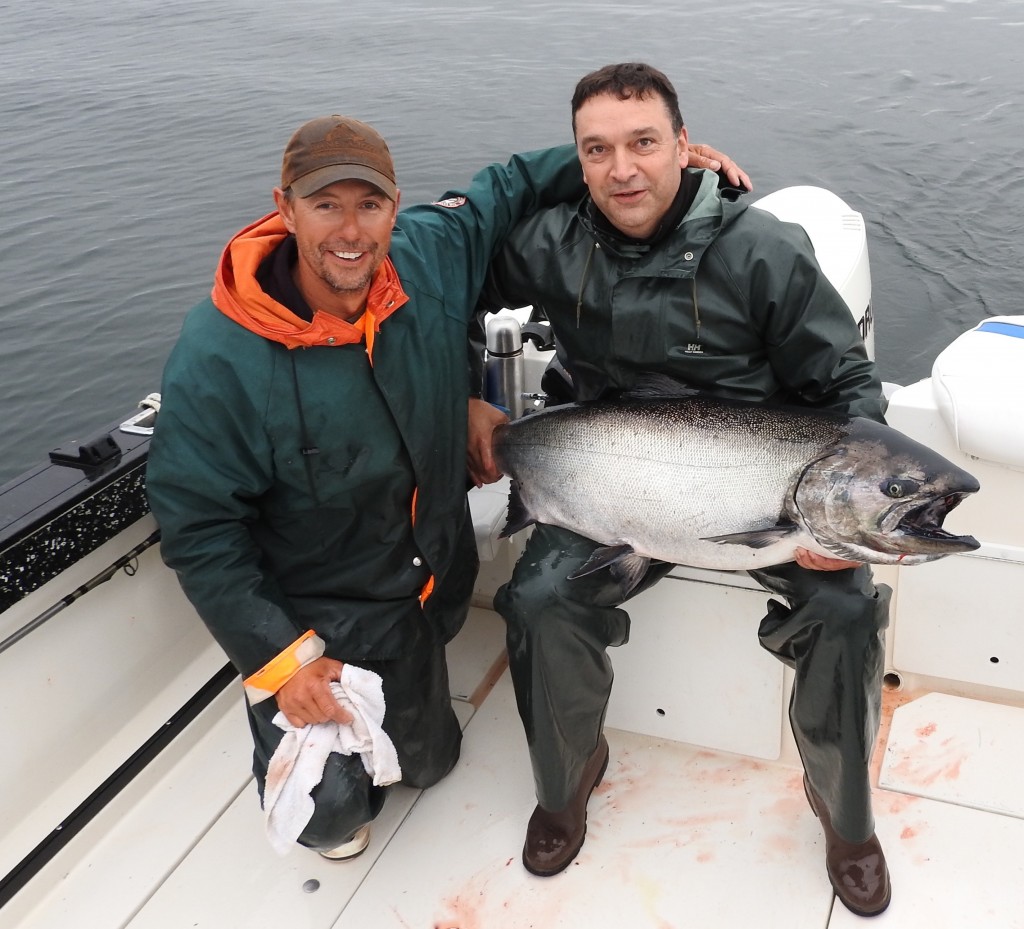 First time Lodge guest Joerg had the trip of a lifetime too – arriving late on Friday night – not on the same schedule the rest of the group and departing at lunch time Sunday, Joerg still managed to clean house.  Joerg’s first ever Dundas Island salmon was a 52 pounder, followed by an even 30 pounder and a couple in the high teens. Add to that 2 nice halibut and a boatload of ling, Joerg went home with full fish boxes thinking “That was easy!”, though he did miss collecting his derby winnings for the weekend!