The good weather streak was broken this past Sunday!  25-35 knot southeast winds pounded Dundas, and so did the rain!  Fortunately the foul weather was short lived and we are now back to enjoying sunny skies and calm seas.

The Fishing has remained very consistent throughout May and into the start of June.  Last week saw many occasions where the “bite was on” and rods were bent over in multiple boats at the same time.  Some Lodge boats were even fortunate enough to have a double header of Chinook salmon.  High fives and smiles were shared by all!  Fishing stayed much the same for the following 4-day group, who nearly all left with their limit of Chinook Salmon.  The majority of fish seem to be in the 15-23lb range with the occasional Tyee mixed in. 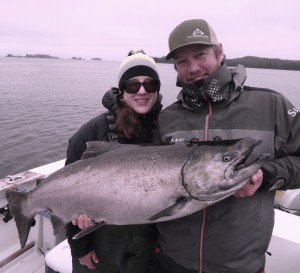 nita Irwin has the largest fish so far – weighing in at 34lbs. Anita has reeled in 4 Chinook at the lodge and all of them have been over 30lbs!  Not too shabby.

Herring have been plentiful each morning.  Reeling up six packs consistently and loading up fast, we have not had to spend much time on the jigging grounds.

We are looking forward to the next group of guests and some more chrome slabs hitting the dock.