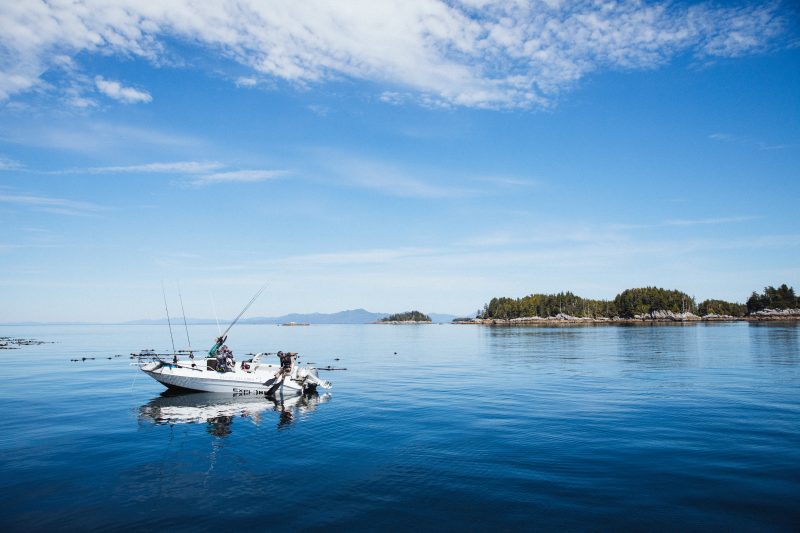 Normally our chinook season starts around the 15th of May – exploring the waters on the north end of Dundas in search of the first chinook bite of the season.  This spring, as days of uncertainty turned into weeks, and the lodge remained tied up in Port Edward, in an effort to maintain our sanity we distracted ourselves by fishing locally. I re-discovered spots I hadn’t fished for many, many moons. Edye Pass, Qualdzeet, Humpback Bay and Hunt’s Inlet, my old stomping grounds as a young and cocky charter boat captain still remain the ‘go-to’ spots for many locals. Fishing through May and early June was exceptional! Chinook in the 10-20 pound range were common and easy to come by. We were catching our limits almost every outing and it filled us with optimism for (what we hoped would be) the upcoming chinook season on Dundas.

This extra time we had in May and June also allowed us to try squid fishing for the first time! The late night squid jigging adventure in Edye Pass was the first, but will surely not be the last. These alien-looking creatures come to the bright spotlights in vast schools and are easy to snag with a herring or squid jig. These squid made for some of the best table fare you could ever imagine considering what they look like before they hit the cornstarch and hot oil  – a bright spot for all of us this spring!

Finally on June 22nd we got the ‘OK’ from our government to open operations and the tow north was on. We were all hopeful that the exciting early season fishing was going to continue, but weren’t as happy as we could have been… July 6th marked the arrival of our first guests, 7 weeks later than usual. Although fishing was decent, the average fish was smaller than expected and the bigger fish didn’t start moving in until later in July.

We were very happy to once again see immense bait balls on the north end of the island this summer – a real bonus when fishing is tough. Generally herring fishing was easy-peasy. Rarely did we have to search longer than 5 minutes and most days we’d just drop in on a school and game-on. As we’ve often discussed, fresh herring is the bait of choice on Dundas. Every fish loves to eat ‘freshies’ from rockfish to salmon to halibut – even large jumbo herring cannibalize their young when they reach the shores of Dundas in early July. The high-energy morsels sustain the rich north coast eco-system.

As July faded into August we were still catching some very nice chinook. For reasons unknown the bigger fish seemed to turn up a little later in the season this year. It was impossible to accurately estimate how many springs were actually swimming through our local waters due to the foul weather hampering access to many of our fishing grounds –storm after storm rolling through the pacific north coast continued to skew our catch stats.

Guests enjoyed some really fine coho action starting by mid July – when they showed up in droves – at times making up for the slower chinook fishing. It was a real bright spot compared to previous years early season returns. Limits of coho and chinook were common by mid July – guests were happy and we were happy. While the rest of the industry was reeling and most lodges were still shut down, we were excited to be busy with guests and to be catching fish.

With the ever-present foul weather, when we did get a day of calm seas we were pushed westerly to some of the finest bottom fishing locations on the coast. Lingcod fishing was off the charts this season. If you had a windless day, you could expect your limit of what is arguably the finest eating bottom fish in the North Pacific Ocean. These are clean, hard fighting, aggressive fish that are always eager to show the anglers a good time.

While yellow-eye rockfish remain closed for retention, the numbers of these fish hooked and released increases every year. Each boat is required, by law, to possess a descending device. These clever devices allow the angler to drop the fish down to the atmospheric levels where their inflated bladders will re-collapse and give them the best chances of survival. Thank you to everyone who has willingly participated in these releases!

Halibut fishing was again strong, although a couple of our spots weren’t as productive as previous years.  Our eager young guides found new spots to challenge our guests and explored areas they will fish for years to come.

As July melted away like a sunset that we couldn’t quite make out behind the clouds, August quickly emerged as a fly fisherman’s heaven … that is until the rug was pulled from under us on August 10.

Les, Mike & Ray kicked off the fly-fishing season on the afternoon of August 3rd.  Anchored up and casting at J-Point they hooked 14 fish on the cast fly before the rest of their group had even arrived! We all had high hopes that this was a sign of good things to come!

The hungry schools of coho moved on and left us with vacant waters. Fly fishermen had a very tough time casting to these ghost fish. With coho sparse, even the bait anglers had to really work for fish. The double-digit coho days of July were long gone and the struggle to search for these chrome bullets began. With the continued poor weather and heavy winds we were again limited to the north end of the island.

Prince Rupert made history in August, shattering historical records for the wettest season on record. Needless to say, most days we didn’t know whether to laugh or cry as we geared up for another day on the water. That said, offshore fishing – when we could get there – was strong – as 198 found out one glorious late afternoon. After a dismal day on the north end of the island, Jason took the chance, braved disappointment and the wrath of the Chef and headed across to Zayas, hoping to redeem the day. Within a couple of hours offshore, 198’s guests had landed their limits of coho, not concerned that they had missed dinner, 198 was, once again, a hero. “Simply fantastic” was all the guests could say when they made it back to the dock.

When the coho fishing is hot, why not mix things up? Casting buzz bombs, spoons and swim jigs for coho is a great way to shake it up. When coho are thick and you can see them swirling on the surface the conditions are just right to give this tried and true method of fishing a go. This technique does require a different touch and feel but is definitely a blast to hook a salmon on a lighter bait casting or spinning reel set up. Interested in giving it a shot?  Let us know next time you’re up, whether it is something you want to try on your own in the evenings or spend some time with your guide – we can get you set up.